Would you like to improve your fitness, improve your health both physically and mentally, meet new people and make new friends?  Perhaps you have dreamt of running a 5K non-stop or even a marathon, but don’t know where to start...  In which case, the Haslemere Border Athletic Club’s Get Up and Run group could be for you.

Haslemere Border AC are an all-inclusive running group encompassing a wide range of abilities and ages, including absolute beginners. We are kicking off a new course to run from Wednesday 28th April 2021 through until Wednesday 7th July 2021. Graduation set for Saturday 10th July. The course will be 10 weeks with 2 sessions per week; 7pm on Wednesday evenings and 9am on Saturday mornings with a mixture of Road and Off  Road, meeting at various locations.  The cost of the course will be £45.

The course is run under 'Covid secure' conditions and so is open to up to 15 people, if you are interested please fill in this form and email to the team ASAP to register your interest.

The course is for anyone who wants to take up running but never quite had the fitness, confidence or motivation to do it, it’s really not for those who can already run 5k. It caters for everyone from the “absolute beginners to running” to the “rusty/unfit returners to running”.  At the end of the course you will be able to complete a 5K parkrun. Our ethos at HBAC has always been to be a friendly, supportive and welcoming running group. We socialise regularly (so bring your cash/cards for a socially distanced cuppa after the Saturday session!)

We start with warm ups and short jog/walking sessions then gradually, over the duration of the course build up to running a full 5k.

During the course, you should ideally run 3 times a week and so will involve a “homework” session of your choice.  If you can’t make the first session, don't worry, you will be given all the encouragement and advice you need to make up for lost time.

Many of our recent graduates have caught the running bug, and are now regulars amongst club training sessions.  Several have even gone on to complete longer distances, with many taking part in last years' Great South Run, and some have even run a half marathon and indeed the London Marathon!

Our Saturday morning sessions meet at 9:00am at the Devil's Punchbowl (8.45am meet in the car-park GU26 6AG) With our Wednesday evening sessions at 7pm in Grayshott Village Car park, behind Sainsbury’s on Cross Ways road). 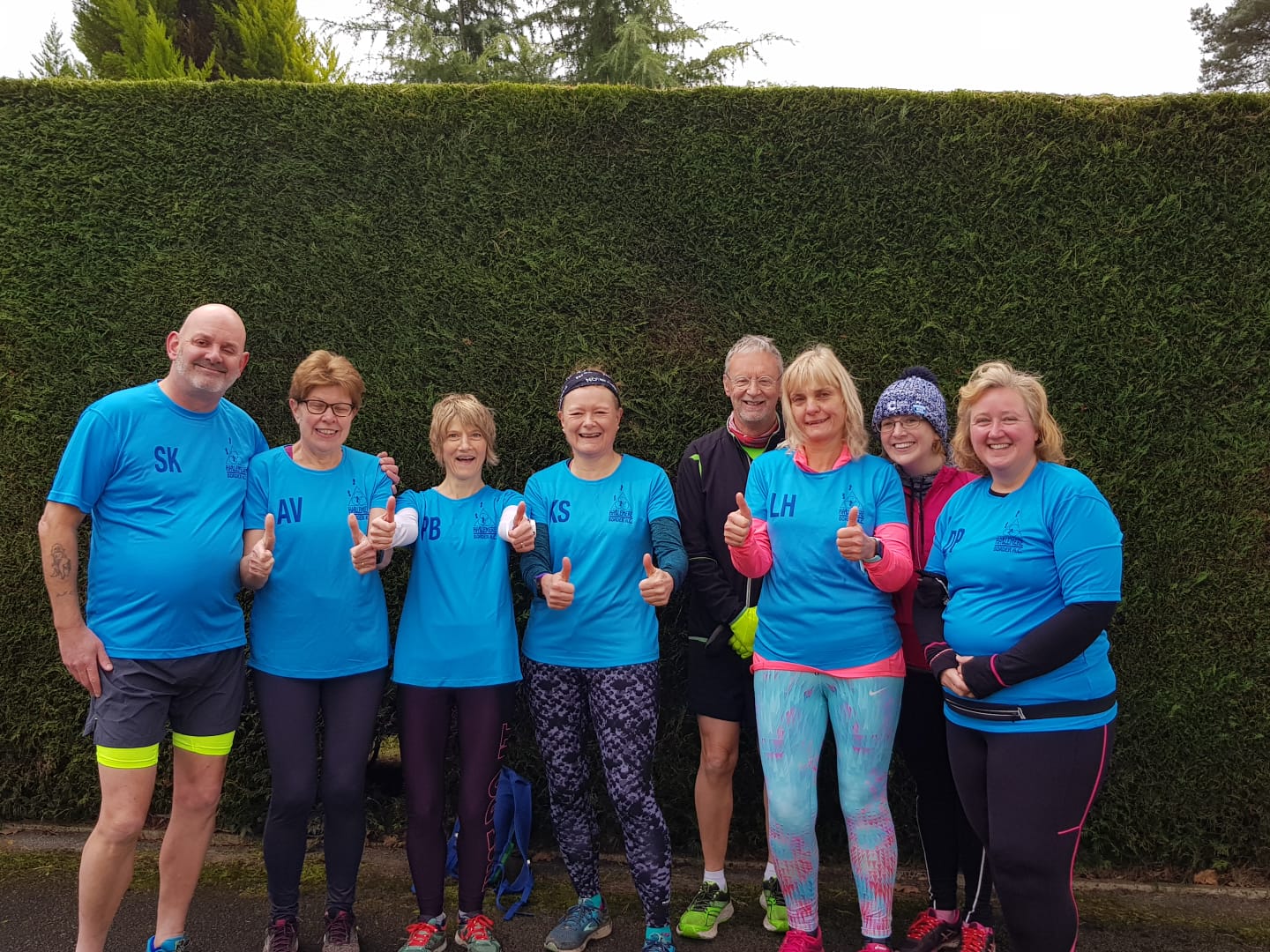 The GUAR Leaders and Team

Qualified coaches run the course, with advice, help and encouragement from run leaders and other club members

Steve – I started running in 2013  I have completed a number of marathons over the years, (as well as shorter distances), one of my main running achievement is the Disney Dopey Challenge,  during the four day period, you run a 5K, 10K, Half marathon and marathon!  I have supported a number of GUAR programmes, indeed I supported both Ann and Debbie (see below) when they completed their courses.

Ann - Reaching the age of 60 and having just lost my father, seeing an advert for a couch to 5k group was the start of an incredible journey for me. Like most those nervous feelings and trepidation soon diminished and a whole new world opened up.  In almost 2 years I have gone onto compete in cross country’s, half marathons and in April will take on the London marathon. I have been supported and inspired by so many, formed many great friendships and above all had tremendous fun. Looking forward to meeting you all and hoping that you too will enjoy the journey. Ann

Philomel - I joined Haslemere Border Athletics Club in October 2014 after moving to Haslemere as a way of getting to meet people as well as learning a new discipline (I was previously based in Cambridge and my main sport was cycling).  I jumped straight in and competed in the Southern League Cross Country races which were fantastic, as not only did I participate with my fellow athletes but my position counted… and this motivated me to go on and try out other races.  In 2016, I was fortunate enough to win a Ballot place for the Virgin London Marathon and that was definitely the turning point. I have since ran 4 more and in 2018 I gained a GFA place for the Virgin London Marathon in 2019. I also gained PB’s in 5k,10k, 10miles and 13 miles and my 4 years of running and training really came into their own.

Karen - Started running in 2010 using C25k after I gave up smoking.  Completed numerous half marathons both in the UK and abroad and 2 marathons.  Not the speediest but get it done.  I joined HBAC in March 2017 after moving to Hampshire and it’s the best thing I ever did as a very welcoming and inclusive club.  One of my goals is to do my first ultra marathon.

Lorraine - I joined the club in 2010 having just moved to Haslemere. I had never run before but my partner was the chairman of HBAC at the time  and thought it would be a good way for me to meet people. It turned out to be the best decision ever! I met some wonderful people who have become good friends and also the added bonus of getting fit!  I’m not the fastest runner (I’m usually gracefully bringing up the rear) but it’s not about speed it’s about doing it at your own  pace and most of all enjoying the fresh air, getting fitter, meeting new people and having fun... You won’t regret it!  Looking forward to meeting you all!

Annalisa - I took up running in 2011 to try to regain my confidence after having two children and breast cancer. Joining HBAC was the best thing I ever did. I’m not the fastest or most elegant runner but over the years I went from hardly being able to run for five minutes to completing marathons (albeit very slowly!). I’ve come to realise that speed doesn’t matter nor does your position in a race. It’s about you, running for you. So pull those trainers on and get out there! Enjoy the journey and that feeling of accomplishment.